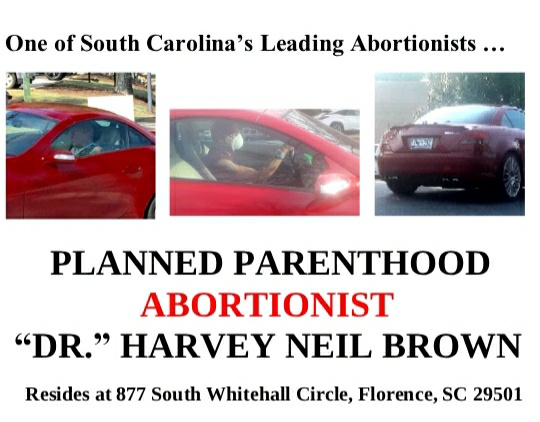 
As alleged in the Civil Complaint linked below filed in Richland County, when one of Harvey Brown's clients changed her mind about killing her baby and told him to stop before he started the "abortion", Harvey Brown 'slapped her on the thigh three times very hard, and said, "Shut up before you run off my clients." ' He then stuck a vacuum device inside her, and committed an "abortion" which was "botched". She later passed fetal parts of her child, and needed further medical attention.
The civil lawsuit filed by the woman against this brutish beast is linked below.
Why hasn't SC Dept of Labor, Licensing and Regulation (LLR) investigated and pulled this butcher and abuser's physician's license ?
Why hasn't SC DHEC pulled Planned Parenthood Columbia's "abortion" clinic license ?
As of May 25, lawbreaker Harvey Brown had not been criminally prosecuted for:
1) Committing an illegal "abortion" without the woman's consent IAW SC Code Section 44-41-20 (scstatehouse.gov); and 2) Assault and Battery for repeatedly slapping the woman very hard.
Where is our "Republican" State Government administration using their executive authority and power (Dept of LLR, SC DHEC) to remove the physician's license from Harvey Brown, and the "abortion" clinic license from Planned Parenthood ?
AS OF MAY 25, NO KNOWN PUNISHMENT HAS BEEN DONE BY SC STATE GOVERNMENT HAD BEEN GIVEN TO EITHER HARVEY BROWN OR TO PLANNED PARENTHOOD IN COLUMBIA (SC) FOR THIS BRUTALITY !