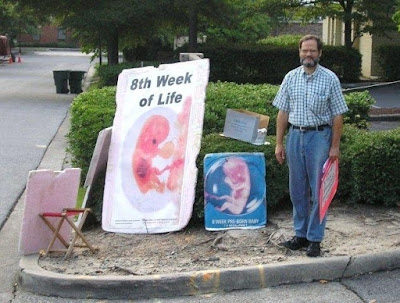 And during the months that the South Carolina Legislature is in session (early January to early June), I have been involved with working to get the Right to Life Act of SC passed (a bill to ban all abortion in SC) since it was first introduced in 1998, and began working to de-fund abortion and birth control and sterilization funding from the SC state budget in 1997.” –  Steve Lefemine

Today I am reminded of the importance of serving the Lord Jesus Christ in humility and faithfulness. It seems some have forgotten their First Love and have become promoters of self and their good deeds instead of pointing others to the Lord Jesus Christ and the work He did on the Christian's behalf. Sadly, I've seen much of this in the American pro-life movement. It makes me wonder if part of the reason we still have prenatal child-killing is due to the fact that we aren't serving God in a true spirit of humility and obedience.

So, as I've been considering the pro-life ministries and its leaders that I've worked with, one came to mind that I believe has been a faithful and true pro-life leader for approximately 30 years now and I want to share his story with you.

In 2004 I was an officer in the Constitution Party of Illinois and attended their national convention in Valley Forge, Pennsylvania. At the time Michael Peroutka was our candidate for President and excitement ran high. But bubbling beneath the surface was controversy regarding the Lordship of Jesus Christ in the party platform and evidence that not all of the national party affiliates were in alignment with the party's Sanctity of Life plank. But out of this controversy arose uncompromising Christian leaders, candidates and members, and my life became truly blessed by meeting and working with them.

One such leader is Steve Lefemine, a pro-life missionary and director of Columbia Christians for Life and Executive Director Christians for Personhood in Columbia, South Carolina.

As a novice in the pro-life movement, I became impressed with Steve's humble attitude and unflinching resolve to see all life protected from the moment of fertilization until natural death. I had come from a background of involvement in the Christian Coalition and the Illinois Republican Party, so to learn that one did not have to compromise with "exceptions" of life of the mother or rape and incest in order to support candidates and legislation amazed me. I quickly volunteered to help with internet tasks and soaked up all the knowledge that I was posting online for CCL.

CCL began working on and lobbying for state personhood legislation in South Carolina in 1997 - 1998 with two personhood bills filed. (You can read more of the history of the "Right to Life Act of SC" here.) And today in 2017 the work continues through the efforts of Christians for Personhood.

So, while folks may have heard of groups like Personhood USA, National Right to Life and pro-life leaders who are in popular demand as speakers that have made a good living off of the holocaust of the preborn, I want to share the story of a consistent Christian witness who has served the Lord faithfully for decades without all the hoopla and applause others have received.

Steve Lefemine became a full time pro-life missionary in October of 1991. Before that he was an industrial engineer with a major tire company, but left that position to work on staff for a pro-life Congressional candidate and shared this with me:

He did not win the election, and I seriously considered an offer to become the plant manager of a new start-up plant. However, I had already become involved with Operation Rescue activities in Upstate South Carolina, after having gone down a couple times to the large national OR event in Atlanta in 1988, and the Lord was calling me into full-time pro-life work, which I committed in my heart to do in June 1989, while living in Anderson, SC. I would drive to Greenville, SC where there were three abortion centers at the time (today there is one), and hold signs and eventually sidewalk counsel there.

After my savings ran out in January 1991, the Lord sent me to the state capital, in Columbia, where there were five abortion centers at the time (today there is one), and I began doing there, what I had done in Greenville. To support myself, I sold possessions, and worked part-time, mostly as a floor/rug flea-treatment serviceman (“Mommy, the flea man is here !”). Later that year, the Lord put it on my heart to depend on him by faith for provision (the discipling of another missionary was very timely and helpful here), which I did, beginning in October.  - Steve Lefemine, "Counting the Cost to Follow Christ"


To learn more about Steve's current work, please visit Christians for Personhood and if the good Lord moves upon your heart to join in the effort in South Carolina to protect all children from the moment of fertilization to natural death, please contact Steve Lefemine at: Christians for Personhood, P.O. Box 12222, Columbia, S.C. 29211 or via email: CP@spiritcom.net

You can also read my interview "Counting the Cost to Follow Christ" with Steve published in 2007 here.

“For which of you, intending to build a tower, does not sit down first and count the cost, whether he has enough to finish it…”
(Luke 14:28, NKJV)