It Takes a Village to Murder Children 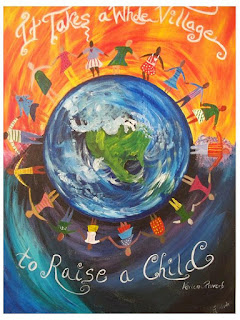 "You shall not follow a crowd to do evil; nor shall you testify in a dispute so as to turn aside after many to pervert justice" (Exodus 23:2).

Wikipedia states, "It takes a village to raise a child is a proverb which means that it takes an entire community to raise a child: A child has the best ability to become a healthy adult if the entire community takes an active role in contributing to the rearing of the child." Hillary Rodham Clinton thought this African proverb was a suitable model for American society and incorporated its collectivist worldview to write a book called "It Takes a Village: And Other Lessons Children Teach Us."

True to her Marxist tendencies, this book outlined well her social engineering governmental policies. Claiming to be a Christian, her worldview framed by Saul Alinsky's Rules for Radicals did much to devastate the God-ordained family that the Lord established as a strong foundation in which to build sound, healthy, societies. From feminism to birth control to abortion to homosexuality, the village she sought to rear children became a gulag that destroyed many of them.

Based upon the fruit of her worldview a better title for her and others of her ilk should be "It Takes a Village to Murder Children." It takes a lot of cooperation and coordination from all aspects of society to successfully exterminate 1/3rd of an entire generation. From the Church House to the White House and everything and everyone in between, we must all do our part to maintain this bloody injustice.

The question before us is what does it take for the American village to murder children with impunity? The list is long and impressive.

3)      It takes a nation to abandon the sound model of leadership, which God instituted to protect, provide and care for women and children, Patriarchy, for the rebellious model of leadership fueled by feminism. Isaiah 3:12 warns, "As for My people, children are their oppressors, and women rule over them. O My people! Those who lead you cause you to err, and destroy the way of your paths." As a result, fatherlessness has become the rule rather than the exception and our sons and daughters are being devoured.

4)      It takes our government to betray its sacred trust, which is to restrain evil, protect life, and stop the shedding of innocent blood. Since Roe vs. Wade, our government has defended the indefensible. Thus, our government has committed a two-fold abomination articulated in Proverbs 17: 15, "He who justifies the wicked, and he who condemns the just, both of them alike are an abomination to the Lord."

5)      It takes a church to fail in being the salt and light in their sphere of influence. It takes the church's refusal to obey the Great Commission to disciple our nation to make sure American keeps the commandments of God. During a genocide or holocaust, anytime the church is silent or inactive, it always strengthens the oppressors and always prolongs the suffering of the victim.

6)      It takes an enemy who has come to kill, steal, and destroy to seduce a nation to murder her children with the sanction of the state and the silent consent of the church.

7)      It takes Americans to once again ignore its own Founding documents to commit violations to its own national covenant. Our Declaration of Independence states, "We hold these truths to be self-evident, that all men are created equal, that they are endowed by their Creator with certain unalienable Rights, that among these are Life, Liberty and the pursuit of Happiness." Our Constitution states, "No person shall...be deprived of life, liberty, or property, without due process of law."
8)      It takes feminist attorneys to dupe a young woman (Norma McCorvey) into being the plaintiff for Roe. Vs. Wade. It takes them schooling her in the devilish art of lying, which leads to murder. Jane Roe committed perjury by testifying that she was raped by 5 black men. This lie became "the law of the land" and true to form, 60 million murders have followed in its diabolical deception. Thankfully, Jesus was manifest to destroy the works of the devil (lies and murder).

9)      It takes a Supreme Court to believe it is the Supreme Being in order to violate God's Holy Commandment, "Thou shall not Murder!" Under the color of law, the Supreme Court has unleashed lawlessness, corruption and tyranny upon American citizens. Courts cannot make law. That is reserved for our legislative branch of government and any law that violates God's law is no law at all.

11)  It takes a Biblically illiterate and historically ignorant people to repeat the painful lessons of those who have gone before us. Have we learned nothing from American slavery or Hitler's Germany? Anytime nations disregard that man is made in the image of God and remove the personhood from a group of people, genocide and holocausts can certainly emerge.

12)  It takes a Prodigal Press that once hunted down abortionists and exposed them as "Blood Sucking Hyenas" to providing cover for the death industry today. They employ Orwellian double speak to project the evil of those who murder baby for blood money upon those who seek to save their lives.

13)  It takes other businesses doing business with death camps that keep the gates of hell open to devour babies who are made in the image of God.

14) It takes the Millennial generation to be captivated by virtual reality so it cannot function in reality to be more concerned about safe places in college rather than the womb being a safe place for babies.

I'm sure there are more aspects that empower this village, but this will suffice for now. Obviously, there are many tentacles that nourish the demonic realm and prop up the ancient evils promoted by these modern day altars of Moloch and Baal. Is there anything that can be done to extract ourselves from this village? Are there godly pursuits that can help turn this village of the damn back into a city set on a hill and a light to the nations?

A good place to start is 2 Chronicles 7:14, which states, "If My people who are called by My name will humble themselves, and pray and seek My face, and turn from their wicked ways, then I will hear from heaven, and will forgive their sin and heal their land." If you saw yourself involved in any one of those scenarios, confess it to God, repent, and be determined to bring forth fruits meet for repentance (Matthew 3:8).

We cannot be the solution to our national sin, which has produced national calamity, if we are living as part of this village. God's Word states, "Therefore, come out from among them and be separate, says the Lord. Do not touch what is unclean, and I will receive you. I will be a Father to you, and you shall be My sons and daughters, Says the Lord Almighty" 2 Corinthians 6:17, 18). It is time we consecrate ourselves to the Lord and withdraw our permission for this village to murder its children with impunity.

To those interested in taking heed to this message, please watch this video that highlights the Three-fold Plan to End Abortion Now.

You can also go to our website www.operationsaveamerica to find helpful materials and then make plans to join us for our national event in Louisville, KY to get some on the job training. Here is our Facebook Event Page for more details. Hope to see you there in Jesus' name!

Please pass it on in your sphere of influence and use it to invite family, friends, and your churches to make plans to join us for our national event in Louisville from July 22-29, 2017. Thanks!
Labels: Biblical Viewpoint Bloodguiltiness National Sin Repentance Rusty Thomas