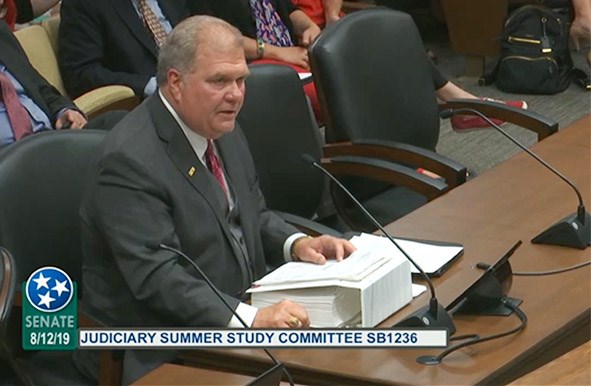 NASHVILLE (BP) -- When New York Gov. Andrew Cuomo signed into law one of the nation's most comprehensive abortion laws earlier this year, he "woke a sleeping giant," declared Randy C. Davis, president and executive director of the Tennessee Baptist Mission Board.

Davis was one of five pro-life proponents who appealed to a nine-member Tennessee Senate Judiciary Summer Study Committee Monday (Aug. 12) to join thousands of Tennessee Baptists and other evangelical Christians in standing for life in the Volunteer State. Longtime observers of the Tennessee Baptist Convention believe it may be the first time that a representative of the convention has addressed Tennessee senators on a major legislative issue.

The Senate committee heard testimony from both pro-life and abortion advocates concerning the Tennessee Heartbeat Bill. Davis observed that the bill before the Senate committee is much stronger than a similar bill passed by the House of Representatives during their last session. The House bill outlawed abortion once a heartbeat was detected while the proposed Senate bill is an amendment to the House bill that recognizes that life begins at conception and thus outlaws abortion on that basis.


"I'll never forget the disbelief, the devastation, and the disgust I felt in that moment," Davis said in his senate statement. He said he realized that Cuomo had "just signed the death sentence of thousands upon thousands of children."