From Christians for Personhood:

In order listed in the online article in The State:

The SC Personhood Bill S.217 is competing with the “Dismemberment Bill” H.3548 for the attention of the SC Senate for Special Order and actually getting debated on the floor of the Senate. 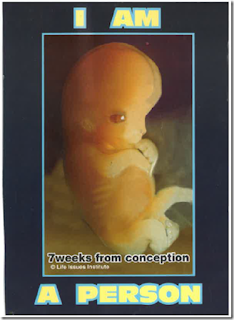 ‘I AM A PERSON’ – 7 weeks from conception and “How To Receive Salvation of the Spirit”
http://christianlifeandliberty.net/2018-03-12-I-AM-A-PERSON-7-weeks-from-conception.pdf

To hear what abortion rights [ CP: sic ] supporters have to say about South Carolina’s abortion bills, read this.

Pro-life activists are optimistic that new abortion restrictions will become law in South Carolina this year.

But with not one but two pieces of legislation that could restrict abortion options ­ or potentially ban the procedure completely ­ opponents of abortion have to decide just how far they think the Palmetto State is willing to go.

Supporters of a ban on so-called “dismemberment” abortions say that measure offers a chance to eliminate a “gruesome” procedure with legislation that will hold up in court.

But some supporters of a so-called “personhood” bill say that proposal offers a more comprehensive measure that would open the door to banning all abortions ­ something even some pro-life activists see as a long shot.

Both measures are headed to the floor of the state Senate but face obstacles to becoming law, not the least of which is that the legislative session wraps for the year in mid-May.

Supporters are optimistic the dismemberment ban could become law, especially after it passed the S.C. House by a wide margin last year.

“This is very similar to the partial-birth abortion ban,” said Holly Gatling with S.C. Citizens for Life, referring to another abortion restriction that survived a court challenge. “That’s why we believe it will be upheld. … It doesn’t regulate women. It regulates the abortion industry.”

Gatling said the ban would end a “barbaric, inhumane procedure” ­ a procedure that doctors call “dilation and evacuation.” The procedure involves removing a fetus “one piece at a time from the uterus,” using instruments to “slice, crush, and/or grasp a portion of the unborn child’s body to cut or rip it off,” according to the language of the bill.

Pro-choice [ CP: sic – Pro-“abortion” ] opponents of the bill say the procedure is the safest and most common form of second-trimester abortion.

But some abortion opponents think the dismemberment bill doesn’t go far enough. Steve Lefemine with Christians for Personhood doesn’t see the virtue in preferring one method of ending a pregnancy to another.

“It would be like a German parliamentarian in the ’40s regulating the Zyklon B in the (concentration camp) showers,” Lefemine said. “The [ CP: Sixth ] [C]ommandment says, ‘[T]hou shalt not kill,’ not ‘thou shall incrementally limit murder.'”

A personhood bill legally would define an embryo as a person from the moment of conception, with all the rights that go along with it. However, since that would go against the U.S. Supreme Court’s ruling in Roe v. Wade, critics worry a personhood bill would face a long and costly legal challenge that the state ultimately could lose.

“It could be stayed through a long legal battle,” said Oran Smith with the Palmetto Family Council, which supports the dismemberment bill. “The Fourth Circuit Court of Appeals is not the Strom Thurmond-Jesse Helms circuit any more. There are a lot of Obama appointments on the court.”

Some make the same case against the dismemberment ban.

Smith says his organization’s philosophy always has been to “chip away at abortions in the state.”

Matthew Clark with Personhood S.C. is confident the GOP-controlled Legislature can advance the personhood bill into law this year. However, the bill has yet to pass the House and the Senate.

“The purpose is to recognize the God-given, inalienable right to life for every human being,” Clark said. “No one is safe if the government determines who does and doesn’t have rights.”