Operation Save America: We Serve a God Who Answers by Fire 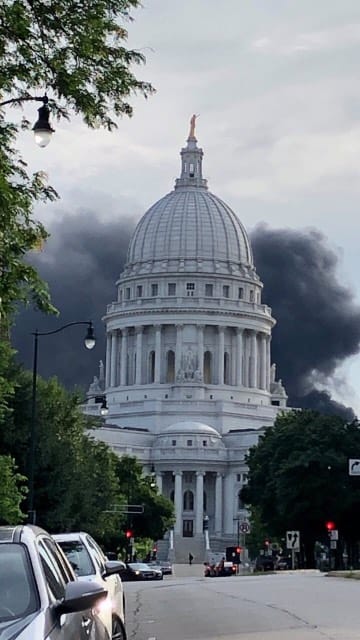 Reminiscent of the days of Elijah and the false prophets of Baal, Operation Save America and the pro-abort group Garbage Fyre Festival squared off at the state Capitol in Madison, Wisconsin yesterday, Thursday, July 18th. Madison became the Mount Carmel showdown between good and evil in our day.

Operation Save America provided a 3 fold witness to the Wisconsin state government officials that reside in Madison. First, there was a paid ad in the Capital Times that contained an Open Letter to the Magistrates and Citizens of Wisconsin. This ad called upon them to rise up and break the covenant of death established by Roe vs. Wade that has produced a culture of death savaging our nation.

Second, there was a team established outside the Capital to bear witness to the truth. Signs, literature and the preaching of God's word went forth, while the Garbage Fyre Festival mocked Christ with vile blasphemies. Third, a lobbying team went to each Wisconsin legislator to remind them of their duty to protect life and stop the shedding of innocent blood defiling and polluting our land.

Is it a coincidence that the day after this prophetic rebuke was delivered to Wisconsin government for sanctioning the murder of innocent babies who are made in the image of God that Madison today declared a state of emergency? Is it mere chance that the very spot of the fire and outage struck at the seat of Wisconsin government, while the rest of the city retained power? Is it happenstance this city is on fire? We, at Operation Save America, think not. We believe there is a direct connection between what happened yesterday and what has taken place today. It is time for others to connect the dots as well.

God's Word warns that the rebellious will dwell in a dry land (Psalm 68:6). Abortion and parading our sin like Sodom means the burning out of man. It means our civilization is nearing the end, lest we repent. The fire in Madison maybe the beginning of woes to afflict our blood stained and perverted land.


Wisconsin magistrates need to tremble before the Lord and do what is right in His sight (Psalm 2:10-12).

We must repent of our national sins, which have brought national calamity upon us. Chief among them are child sacrifice (Abortion) and homosexuality. The church and state may fail to address and defeat these evils, but God cannot deny Himself. Our God is a consuming fire (Hebrews 12:29).

Abortion is Murder Operation Save America