ABORTION IS NOT JUST A SOCIAL OR POLITICAL ISSUE 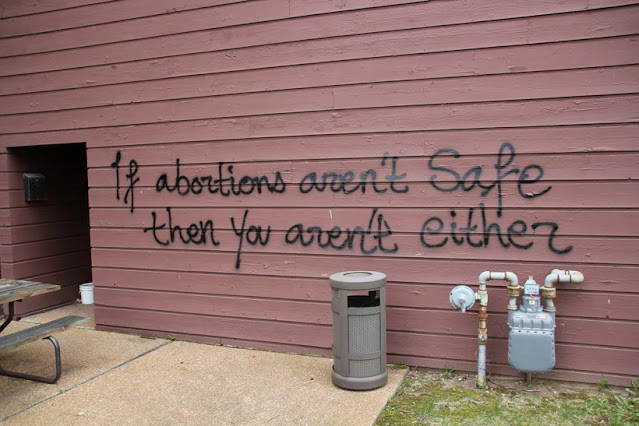 The pro-aborts are imaging their real mentor:

It is imperative for the Christian to always view things from a much bigger perspective – not just in terms of economic or political or cultural aspects. There is a spiritual dimension that lies behind all the crucial issues of the day. Certainly when it comes to things like the culture wars, we are foolish not to bring in the spiritual considerations.

Indeed, to ignore spiritual realities as we discuss the main controversial debates of the day would be like a painter to ignore every colour on his palette and just use black and white. If he were painting a major snow storm that might be alright, but if he were painting deciduous trees in autumn, it would be unduly limiting.

At the very least, we know that spiritual warfare is part and parcel of the battles we fight – be they political, ideological, cultural or intellectual. We will never get very far if we ignore or downplay spiritual realities. The battles over marriage and family for example are not simply cultural and social matters, but at their heart are spiritual matters.

As such, either we side with God and how he intended marriage and family to be, or we go with Satan and buy into his attempts to ruin every good thing God has created. In such a spiritual war, prayer and intercession are of course needed as much as political lobbying, writing letters to the editor, doing street protests, and voting for onside candidates.

All this may make no sense whatsoever to the non-Christian, but all Christians should understand this quite clearly. All of life is being fought over on a daily basis. It really is a battle between good and evil. And at heart it is a spiritual battle. It was C. S. Lewis who rightly said: “There is no neutral ground in the universe. Every square inch, every split second is claimed by God, and counterclaimed by Satan.”
Labels: Abortion is Murder Abortion Violence Biblical Viewpoint Roe v. Wade Satanists Spiritual Warfare