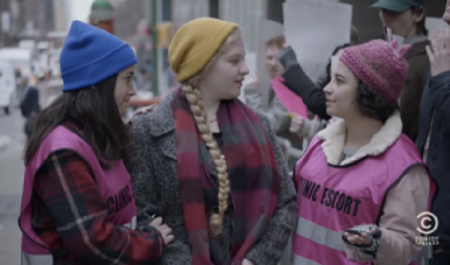 By Geri Ungurean - Posted at Absolute Truth from the Word of God:

On the Comedy Central show “Broad City” Hollywood shows the world just how much they unashamedly worship Satan. The Pro-Death camp has always been led by the Evil one, but because he is the Deceiver, this movement was very subtle in the 1970’s.

After the Roe Vs. Wade decision in 1973, women were told in killing mills that “It isn’t really a baby right now. It is only a clump of cells.” Now, these satanically inspired women brasenly tell the world “My body – my choice.” They would have an abortion right up to the day of delivery. They claim that their consciences are clear.

Here is a clip from the disgusting Broad City show:

Some women might have a clear conscience, or better said – they are void of a conscience altogether. But many women are left feeling empty and lost; always wondering about the life they allowed an abortionist to snuff out.