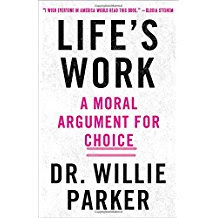 Humane theology was the foundation of Dr. George Tiller’s practice. It dictates that alleviating suffering is a Christian’s sacred responsibility. If God is in everything, and in everyone, then God is as much in the woman making a decision to terminate a pregnancy as in her Bible.
—Dr. Willie Parker, MD, Life’s Work: A Moral Argument for Choice[1]

Because of his “oneness” worldview that God is “in” everyone and everything is “in” God, Dr. Willie Parker believes that God sanctions aborting-killing of babies. The Oprah Magazine quotes him as having written in his book,


Alleviating needless suffering is a Christian’s sacred responsibility. If God is in everything, and everyone, then God is as much in the woman making a decision to terminate a pregnancy as in her Bible.[2]


Having quoted Parker, it needs to be stated that while the “act” of abortion is outside of God’s love neither the aborted baby nor mother are outside of God’s love. In the traumatic aftermath of having aborted a baby, many women have found forgiveness in and through the Cross of Jesus Christ (Romans 3:23; 1 Timothy 1:12; 1 John 1:7-9). Further, we harbor no personal malice toward Dr. Parker nor do we wish for any harm to come to him because he is an abortion provider. God is his judge, and along with the rest of us, Jesus will judge all of us (John 5:25-29).

That having been said, we turn to Dr. Parker’s “counternarrative” in which he confesses,

As a Christian, I feel that it’s my job to help offer a counternarrative that God gave every woman gifts and the agency to realize those gifts, and that nothing about choosing to terminate a pregnancy or delay childbearing puts a woman outside of God’s love.[3]


As a devout Christian and one of the only physicians performing the procedure in the Deep South, Parker refuses to cede the moral high ground, making an impassioned case rooted in science, history, and theology for the sanctity of a woman’s autonomy over her own body.
— The Oprah Magazine[4]

So to assert the higher moral ground, Parker asserts his “counternarrative,” one he intends to either modify or replace the accepted Christian narrative—one based upon the Bible—that abortion on demand is a crime against God and humanity (Psalm 139:13-14; Jeremiah 1:4-5; Isaiah 49:1, 5; Luke 1:15; Exodus 20:13; 21:22-25). Now in his new narrative Dr. Parker suggests and claims that God, who is the author of reproductive life, morally approves of abortion. He does this because his worldview is oriented not according to the Christian faith, but according the New Age/New Spirituality “oneness” assumption that all persons are in God and God is in all persons. This writing does not concern all the points and counterpoints of the abortion issue, but rather seeks to address the premise upon which Dr. Parker attempts to create his “counternarrative” which, he claims from his Christian perspective, justifies abortion in the name of God.

Because he believes the mother is “in” God and God is “in” the mother (and presumably also “in” the unborn child), Parker’s new counternarrative, evidently, more or less, embraced by the Oprah establishment, announces abortion to be a sacred and divine right. This is a scary development for it transfers power over human life from God to women and their abortion-performing doctors, and this, no less, with God’s approval! Parker creates his counternarrative out of an ungodly assumption that no separation exists between the Holy God and humans, only a “union of oneness.” Of course, this is nothing other than repeating the premise of Satan’s lie to Eve, go ahead and eat what God forbids for “You surely will not die! ...You will be like God, knowing good and evil” (Genesis 3:4-5). So to keep the abortion industry alive even as babies die, Dr. Parker repeats the lie that because everyone’s “in” God and God is “in” everyone that everyone is “as God.” Like a broken record, we have heard this before.